Drug abuse and addiction are not exclusive or prejudice, affecting every race, gender, socioeconomic status, and age. Because laws make some addictive substances legal at a certain age — cigarettes at 19, alcohol and marijuana at 21 — the underage population’s drug use is viewed more as a discipline issue rather than a serious addiction issue. However, nearly 76 percent of high school students have used an addictive substance by graduation and those who use addictive substances before they turn 18 are 60 percent more likely to form an addiction. This is due in part to underdeveloped brain structures and partly to habits being formed in formative years that make them much more difficult to break. For these reasons, it is important for teens and their parents alike to understand the teen drug problem to help prevent it. 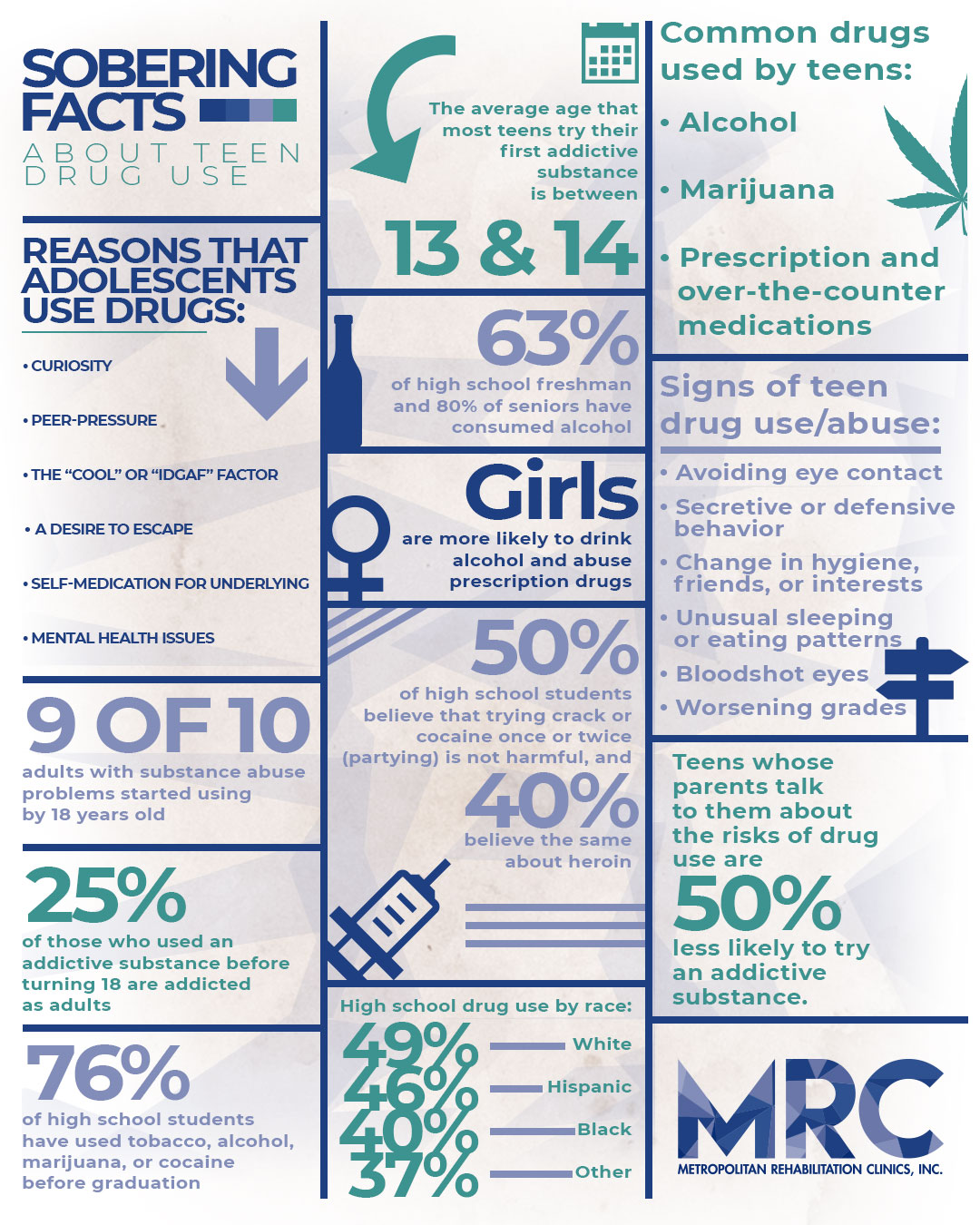 Middle and high schools tend to be times that are heavily influenced by peer pressure, whether direct or an attempt to fit in. Additionally, the puberty years cause many students to feel awkward and uncomfortable, which amplifies the desire to fit in. Body image issues, the development of sexual attractions, and leaving childhood to enter early adulthood leave adolescents searching for their own place in the world. Some students try addictive substances out of pure curiosity and others as a coping mechanism for trauma or underlying mental health issues.

Many high school students have some false beliefs that make drug use not seem like a such a big deal. For instance, nearly 50 percent of high school seniors interviewed did not believe that trying crack or cocaine once or twice was unhealthy or could lead to addiction, and instead was viewed as “partying.” Additionally, 40 percent of those same seniors had the same belief about heroin. The problem with beliefs such as these is that all of those substances, namely heroin, are so incredibly addictive that even a single use can lead to a lifetime of battling an addiction. (For more information on heroin use, read here.). Simply teaching children that using drugs is “bad” is not enough of a deterrent for those youth who are learning to assess the risks and benefits to make their own informed decisions. The best way to combat the teen drug problem is by informing kids of the dangers and why they shouldn’t use as it relates to their health, safety, and future.

Use of addictive substances during adolescence interferes with the development of a healthy brain and sets a teen up for a life of battling addiction. It is important to have the “tough talks” with youth to encourage them to make healthy choices and to teach them positive coping mechanisms that will help them avoid drug use. Teaching adolescents the severe consequences of even trying addictive substances may be enough to overcome curiosities. Awareness of mental health issues and supportive parents can also help to reduce teen drug use. If you think your teen may be using or abusing addictive substances, contact Metro Rehab for tips on how to address the issue or to get your teen the help they need.